...I'm over on Sarah's other blog Have a Happy Hen Do where I am talking about a particularly memorable hen do activity I experienced recently.

Please note this post contains sausages, fancy dress, and photos of me in fancy dress with sausages.

You have been warned.

London with almost a plan

One thing you should never do in London.

Go without a plan.

For in a city with a myriad of opportunities it is impossible to choose anything to do when put on the spot.

One other thing you should never do in London.

Go when it's pissing it down with rain.

For in a city which is mired in a blanket of grey and misery it is even more impossible to choose anything to do when put on the spot. 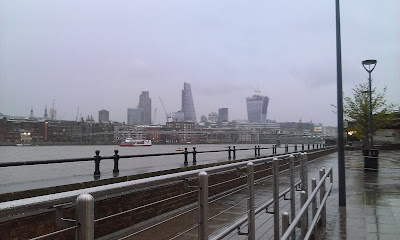 It's ok though, you last about 20 minutes in there. The breaking point is when your significant other sees a piece of art which is some wood with stones hanging from it at varying lengths. It turns out that that is his limit when it comes to modern art.

You swallow your "I told you so" and trudge back outside into the gloom (after a visit to the gift shop). 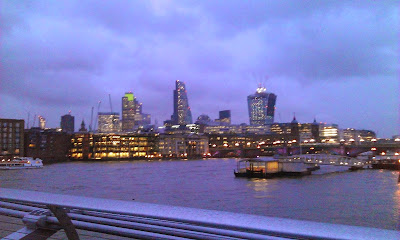 This is why it's important to have a plan. 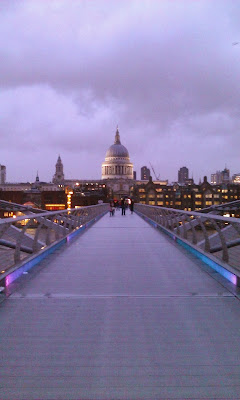 Responding to my plea for somewhere cool to have tea and cake she gave me more than one idea and one h happened to be close by to us, underneath the menacing clouds.

For we are headed to Bea's of Bloomsbury (the St Paul's branch).

We follow the directions on the website (when they say keep turning right they really do mean keep turning right) looking for the hanging teapot lights, foolishly thinking they're hanging on the outside. At the point where I'm about to lose my temper and the rain is really starting to wear us down, we spy a welcoming glow in the distance... 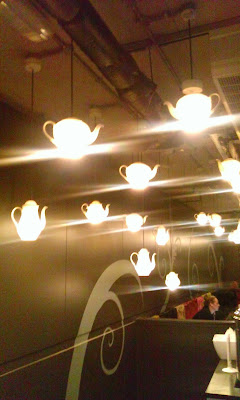 What better way to decorate a tea shop than with hanging teapot lights?

Bea's of Bloomsburys manages to do a difficult thing - be homely without being chintzy, be small without being claustrophobic and be cosy whilst still maintaining a sense of 'coolness'.

We somehow manage to pick the same cupcake from the vast array of cupcakes and cakes and general sweet stuff on offer. Normally the idea of getting the same thing as the person sat opposite me horrifies me but the rain and gloom have got into my soul and I just really bloody want that peanut and chocolate concoction that's begging for me to eat it. 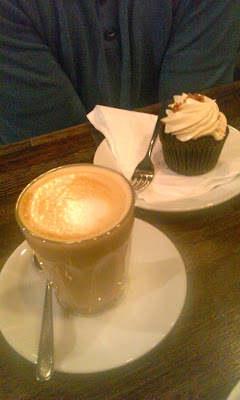 We sit and we talk and we do that ever so British thing of rolling our eyes at a table of women who shriek at some unexpected news. We talk about the weekend ahead, which is going to be spent in Horsham, staying with some of The Person's family and we talk about this and that and a little of the other.

And then we decide to just head to the pub where we're meeting his family later.

Because we are in London without a plan.

Things that go bump in the kitchen

I really don't like cooking you know. I've tried and I've tried and occasionally I can find myself enjoying it but mostly it feels like a chore, much like washing your hair. It's one of those things you've got to do but you don't ever really feel like doing it.

I wish that meant that I didn't like eating but unfortunately it's not the case. I sometimes wonder if, left to my own devices, I'd just sit and eat outrageous amounts of toast, salad and crisps.

Actually I don't wonder at all - I'm home alone tonight and have just eaten beans on toast. I felt proud of myself for grating cheese.

But I'm lucky really, The Person actually enjoys cooking. He loves sitting and sifting through cookery books, looking up recipes online, chopping things and throwing stuff in a pan, putting things in an oven and all manner of spatula-related kitchen wizardry.

And so I know I definitely shouldn't complain.

Have you ever attempted one of Jamie Oliver's 30 minute or 15 minute meals? If you haven't this is basically how it goes:
1) It takes about 3 times longer than it should do
2) You use every utensil and pan and piece of crockery you own
3) Your kitchen is destroyed by the end of it.

The trouble is, every expedition in to the kitchen for The Person ends this way. It's not specific to Jamie Oliver, it's the same for every single meal. Most of the time after eating a lovely meal and getting up to put my plate in the kitchen he stands up, takes the plate from me and goes, "Don't go in there." I know well enough not to - my poor heart won't be able to stand the strain.

Don't believe me? Look at this: 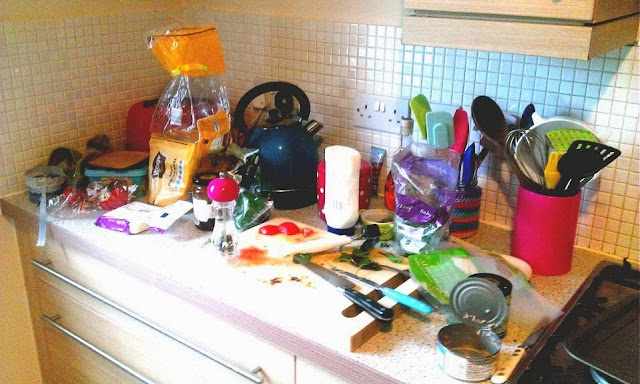 This is what happens after The Person makes two sandwiches.

But I'm really not complaining.

Email ThisBlogThis!Share to TwitterShare to FacebookShare to Pinterest
Labels: food, living together in harmony

In praise of mediocrity

"Most people don't workout and then feel sad about it you know" The Person says to me when my downcast face appears in the kitchen after another hard workout.

I then take him through all the exercises that I wasn't able to do. Mostly because the woman doing the exercise workout is a ballet dancer who appears to have legs the length of my front room and can dislocate her hips at will.

"You are literally the only person I know who works out and then beats herself up about it. You can't be perfect at everything you know."

I have decided he is right...

I have the flexibility of an arthritic 80 year old.

(In fact I struggle to do the 'girl' push-ups.)

I use baked bean cans instead of normal hand weights and sometimes those are too heavy for my puny arms.

I could be one of those people who reads other people's fitness posts on blogs and then feels like complete crap about herself because she'll never be that fast/strong/toned etc etc....No. Wait a minute. I am one of those people.

But being that person makes me terribly unhappy and the boyfriend is right, it really isn't normal to feel bad after doing a workout because you suddenly realise that you're not Mo Farrah/most other people you know who run 10km races.

And so, instead of finishing the workout and beating myself up that I could only do three quarters of the leg raises before having to stop and call the stupid, smiling, dancer woman in legwarmers a bitch, I shall finish the workout and give myself a high five for working out until my arm and leg muscles ache - it's not my fault that they ached so early on, turns out I'm not as fit as a fitness instructor. I shall give myself a high five for even doing one leg raise - that's one leg raise more than I would have done if I'd come in and sat on the sofa in front of the TV all night.

I will delight in my mediocrity. I don't want to be the "best I can" at running. I want to be able to do a bit of running and not die during/immediately after. I want to work up a bit of sweat, not throw up the contents of my stomach. Most importantly I will stop calling it cheating if I have to walk during a run - because that shit is crazy.

And now, if you will excuse me, I need to go and mentally throw darts at the face of that stupid, smiling dancer woman in the legwarmers.
Posted by The Girl at 22:28 16 comments:

Email ThisBlogThis!Share to TwitterShare to FacebookShare to Pinterest
Labels: emotional nonsense, run run as fast as you can, The Person
Newer Posts Older Posts Home
Subscribe to: Posts (Atom)